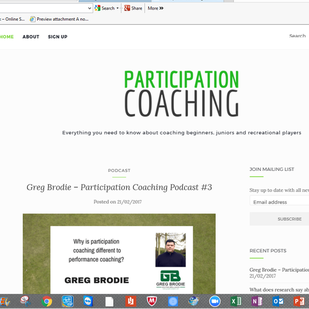 Click here to listen
How knowing how you gaze at the ball can help you save shots through better putting
How Tensegrity can change the way we develop as golfers
Zenio vs. SAM vs. Blast
"Like many I recently purchased a Blast Motion Golf device. Although the Blast is sold to aid the golfer with numerous departments of their game, I purchased mine with the intent of using it to give me feedback on my putting stroke......."

Read more...
From Nine Handicap To Scratch - My Story
"Since falling back in love with the game of golf 5 years ago and throwing in my 3 cards at my home club North Hants to get my handicap back, which at the time seemed way too high, coming from a handicap of 2 back in 2006/2007 to be given a handicap of 9 in 2011.  I managed to get this down to 6 over the winter period but just found myself in a rut and couldn't get back what I had.  We get older, body shape changes, long commutes into work etc.
Read Richard's Story
How Eldoa can help you play better golf

As we approach the Rio Olympics, one of the most anticipated events for some is the 100 metre sprint as one of the greatest human challenges has been to explore how fast a human can run. Thankfully we are yet to know the answer to this and for some this is what inspires them to continually search for improvement. In previous times, many humans believed that the four minute mile was unachievable due to many influences such as physiology.....
Read more...

The role of stretch shortening cycles in golf.

Recently we discussed the role of the movement at the start of the downswing some refer to as ‘X Factor stretch (XFS)’. In the short review, we discussed how this move can be helpful for some and of minimal influence and occasionally of harm to others due to influences such as the player’s anatomy, physiology, neural patterns and swing concepts. These constraints will essentially help determine the players ability to create this move however as previously discussed, the value of this move in isolation is questionable as a substantial amount of players have been observed that produce significant driving distance with negligible
Read more...

Segment speed or segment force, which one is of more value in golf?

Historically in golf segmental speed (angular velocity) has been the accepted measurement of how the body segments (pelvis, ribcage, arm, hand and club) produce and apply speed and this has often been seen by some as the predictor of/correlation to driving distance/ball displacement. However we are now able to provide segment force values through the new information produced by the Bull3D software. This has revealed some fascinating and intriguing patterns and discoveries, one being that when it comes to its influence on driving
Read more...

Data….. How do we collect it, interpret it and apply it to understand swing patterns?

In the world we currently live in, information is pretty much accessible at the click of button, practically anywhere and at any time. It is this information that has helped coaches make better judgement calls than ever before and allowed for a completely new way of developing the athlete. It was fascinating to listen to the interview given by Team Sky cycling coach Shane Sutton just after Sir Bradley Wiggins won the time trial in the recent Tour of Britain. Sutton stated that he couldn’t wait to see the numbers that Bradley had produced to
Read more...